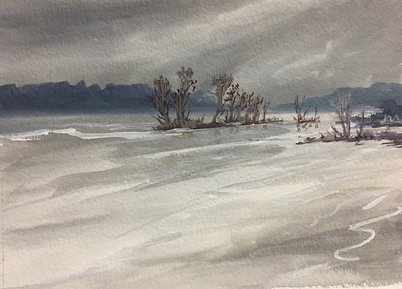 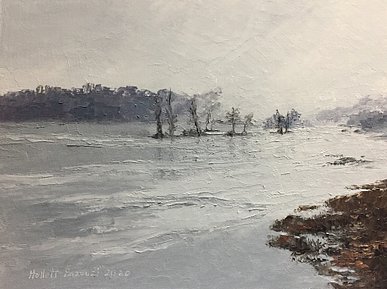 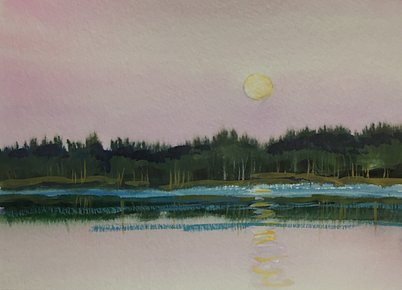 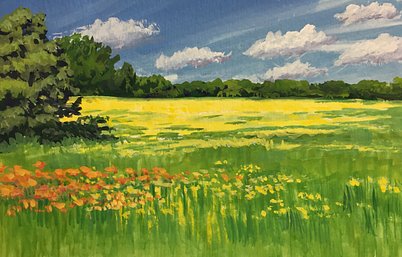 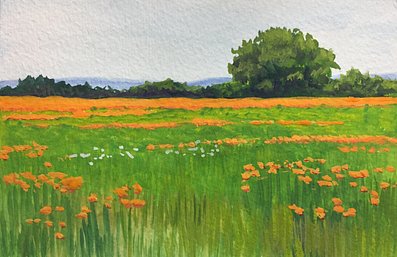 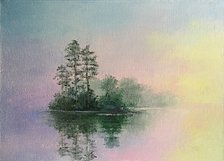 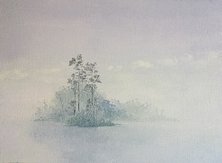 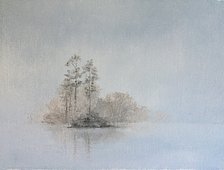 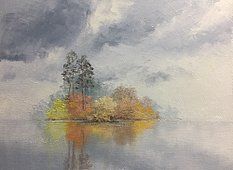 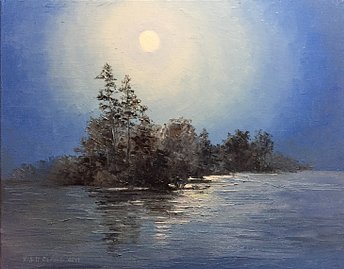 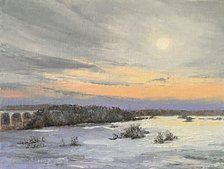 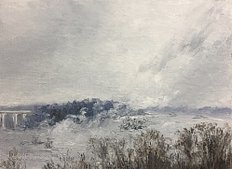 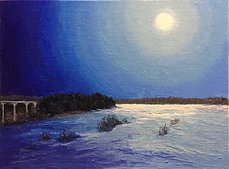 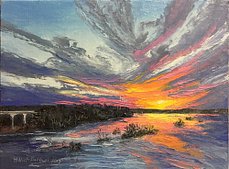 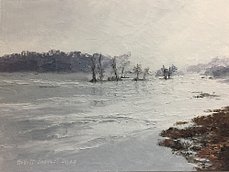 Then I began working with gouache. Gouache (pronounced gwash) is opaque watercolor, like poster paint or tempera paint, but of a higher quality. Like all paints, it has its own unique set  of qualities, both good and bad. Gouache dries very fast, and covers what is underneath. So, mistakes can be more easily corrected than, say, watercolor. But it is easy to get the first layer too wet when overlaying, and then the paint is LIFTED (and not in a spirtual way). There is a learning curve... Fortunately, this is all we used in high school, so I have ancient memories to fall back on.

I always begin with a color study, with the colors I have. In this case, I was working with different thickness of each color.

Above is the oil (sold) that inspired the gouache to the left.

Moon Setting on the Mattaponi River

Gray Day on the James

After I worked all those different versions of the same clump of trees, I walked along the James around Tredegar and Oregon Hill. This inspired another set of paintings....

From Oregon Hill—Sunset on the James, oil on canvas, 6x8    SOLD

From Oregon Hill—Full Moon on the James, oil on canvas, 6x8   SOLD

From Oregon Hill—Christmas Day on the James, oil on canvas, 6x8   SOLD

From Oregon Hill—Foggy Day on the James from Tredegar, oil on canvas, 6x8     SOLD

So, after I spilled coffee and paint all over my sketch, I began.

I took a cue from a painting I did last February. I at that time I recreated a painting by Edward Bannister, based on a black and white sketch he had done, and using other paintings of his for color rendition. It was very empowering.    More about my work with Bannister

I thought about how I could apply this to my own work, particularly since I had been doing so many sketches. With this in mind, I created multiple versions based on two different sketches. The first was a simple sketch I had done of a stand of trees at the Upper Pond in Bryan Park. I had done several paintings of this view based on photos I had taken, so I was familiar with the subject.

I wondered...what would happen if I concentrated on creating certain effects, and using the trees only as props upon which to 'hang' those effects...